I am on lock down today and started my day off with a list of to-do’s that I created last night while I binged watched The Mick with my 16 year old daughter.

My life is immensely better than what I dared to imagine one year ago. Two years ago, I would have thought being home with my daughter was impossible, three years ago I was paralyzed by too much fear to think of the future, and four years ago I would have laughed in your face and told you no way in hell would I find strength from my shattered life.

I don’t have much to write today. I have been searching for all the paperwork I saved from GWC to scan on my blog. Paperwork from when GWC wouldn’t allow my daughter to come visit me unless a guardian was with her. By Hiland Mountain Correctional Centers (HMCC) standards, I was able to get a notarized form signed and a close friend was able to bring my daughter to see me regularly. HMCC strives for family unification and has a conscience and a heart. Shortly after I got to GWC I was told that form wasn’t legal. Only a legal guardian, namely a parent, could bring my then 15 year old in to see me. I could not get something notarized by the court and have a friend bring my daughter. So, since I was still married I had my now ex husband bring her. He was nice enough to do it as often as possible, but then GWC said he wasn’t considered a legal guardian and I was threatened with a write up.

As you can imagine this whole ordeal became a stressful issue where I documented everything.

And that is what I am planning on writing about, as soon as I find those files.

But today, while I am on lock down, I get to spend the day with my daughter rather than being frustrated about visiting issues. I’ll save it for another day when she is at work or out with friends.

That being said, I wanted to add a poll to see what others felt was needed for prisoner related issues.

A pic of my disorganization when I read through all my old journals as I blog. This is just an assortment of loose papers in one of my many journals. 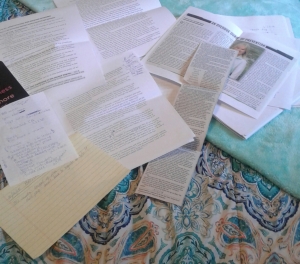 I have a passion for assisting small businesses to stand out on the web and look to innovative ways to maximize your marketing and online presence with any budget. The importance of having an online presence for attracting new customers cannot be understated. Not all websites are created equal. When looking at two competing businesses a customer is likely to go with the one that has a more professional, engaging, website.
Previous Post
Next Post