One way to set someone up for failure is to pull them from their support network.

This is the last of my three blogs I have set out about Glenwood Center.

Social support has been conceptualized as including three main components: strength of support, network characteristics, and the types of support offered. Strength of support reflects the perceived level of supportiveness provided by individuals in one’s social support networks (Groh, Jason & Keys 2008). Important social network characteristics include the size of the network as well as the types of the people comprising the network, such as the percentage of substance users within the network (Zywiak, Longabaugh & Wirtz 2002). The types of support provided by one’s social network can be tangible (e.g., exchange of physical items such as money, food, etc.) or intangible (e.g., through exchange of emotional support), or may be problem-specific, such as support for substance use treatment or attitudes of network members regarding a woman’s continued use of alcohol or drugs (Groh et al. 2007; Groh, Jason & Keys 2008). Various kinds and sources of support may play different roles in an incarcerated woman’s depression course, substance use recovery, and her re-entry efforts (Bui & Morash 2010; Harp, Oser & Leukefeld 2012; Johnson et al. 2011a; Staton-Tindall, Royse & Leukfeld 2007).

When I got to GWC I was told I could not have visits from ex-felons, which posed a variety of issues. I have been in recovery for multiple years, and let’s face it, the majority of us in recovery have had some issues with the law. Much of my support family has long term recovery, and are now law abiding citizens. One close friend, really family member, was practically a surrogate mom while I was at Hiland Mountain Correctional Center (HMCC), making sure things were taken care of at my home and with my two children. Once I got to the Glenwood Center I was denied any contact with her, although she was finishing up a degree working in the social services arena and was completing a practicum at a local residential treatment center. The issue? She had an SIS from years previously, and therefore I would be in violation of the GWC rules if I was to contact her.

At HMCC, she was able to visit and bring my daughter to see me. At HMCC my daughter was allowed to be dropped off on Friday nights for Girl Scout meetings that met weekly at the institution. HMCC is a correctional institution for women that actually had programs and activities available to decrease the likelihood of recidivism.

Glenwood Center seemed to be pulling me further and further away from communicating with my loved ones. Not only was physical contact difficult, phone contact was difficult as well. Women at GWC had two pay phones, .50 cents a call (more if it was a newer cell number, as it was $1.50 for 3 minutes to call my daughter on her cell phone) and one of the pay phones would not accept money, only calling cards. There were an average of 15 women where I was there at GWC. 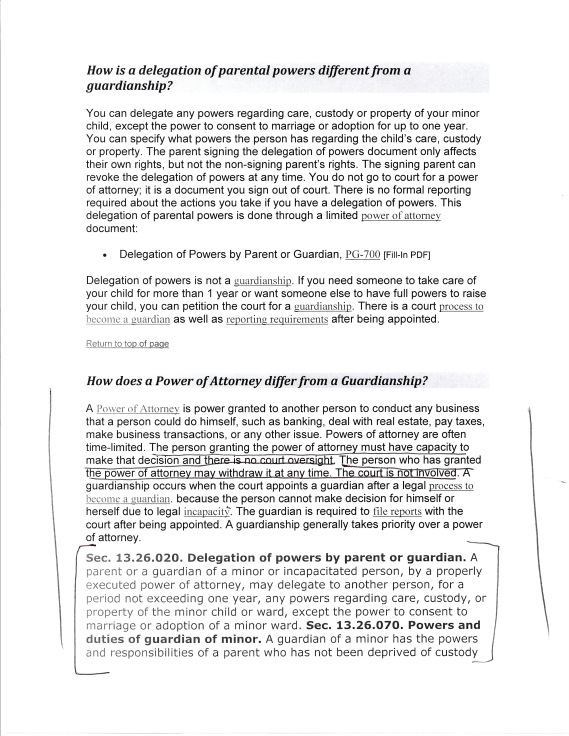 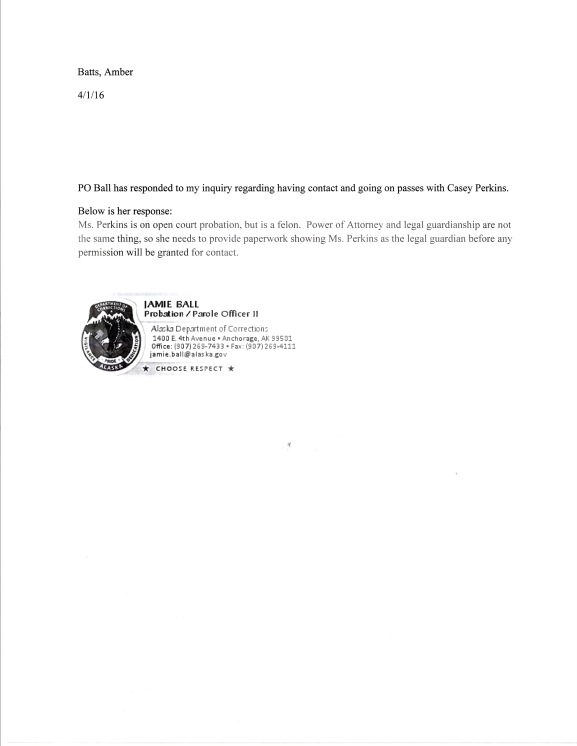 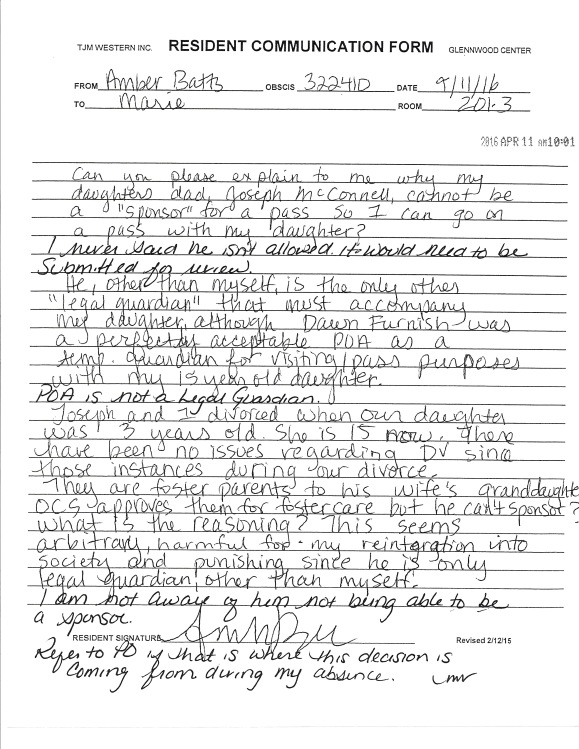 Changed their minds, since  my daughters dad had a domestic violence charge , cannot go on passes after all. 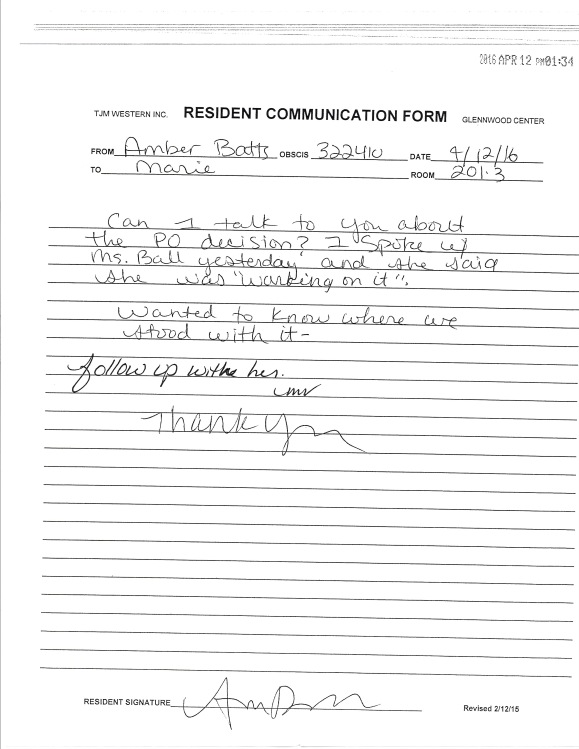 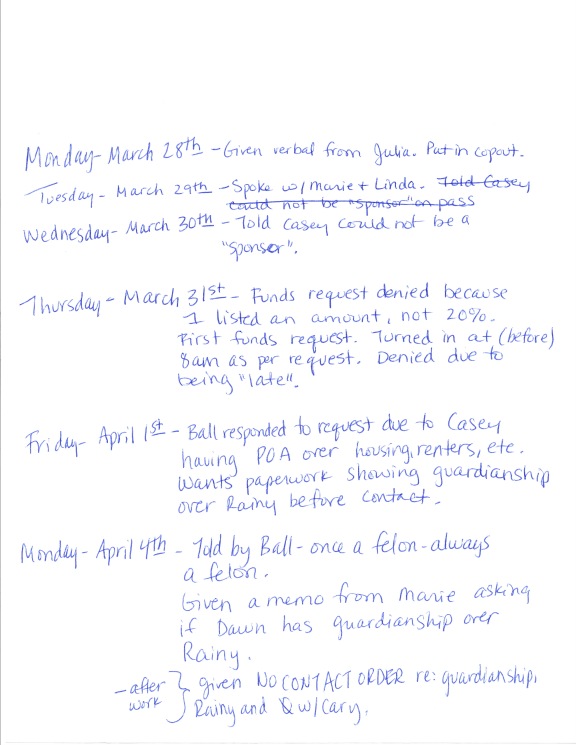 What happens when you put a grievance in. This is how I think it all started. 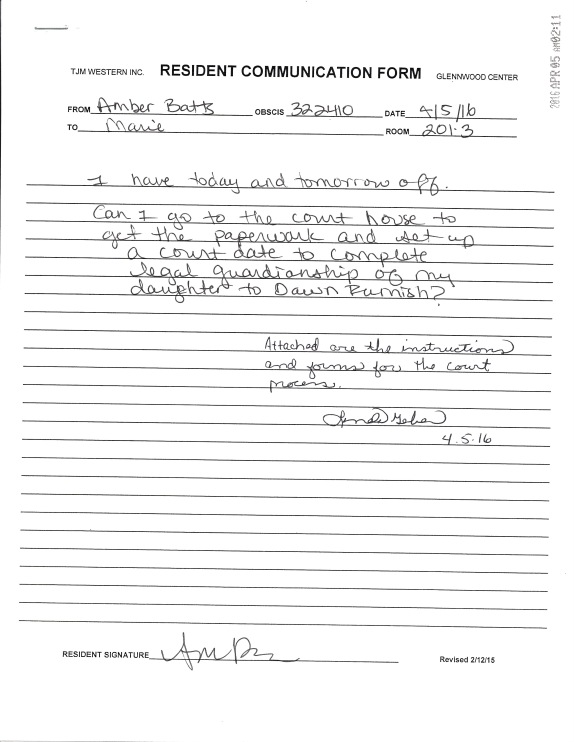 At first, the reasoning was that the Power of Attorney was invalid due to it being for Hiland Mountain Correctional Center, then after I had put in a request to update the POA, I was told Legal Guardianship is needed to bring my 15 year old daughter to visit. How was the stipulations and rules for visiting at a Community Residential Center more stringent than an official Correctional Facility? 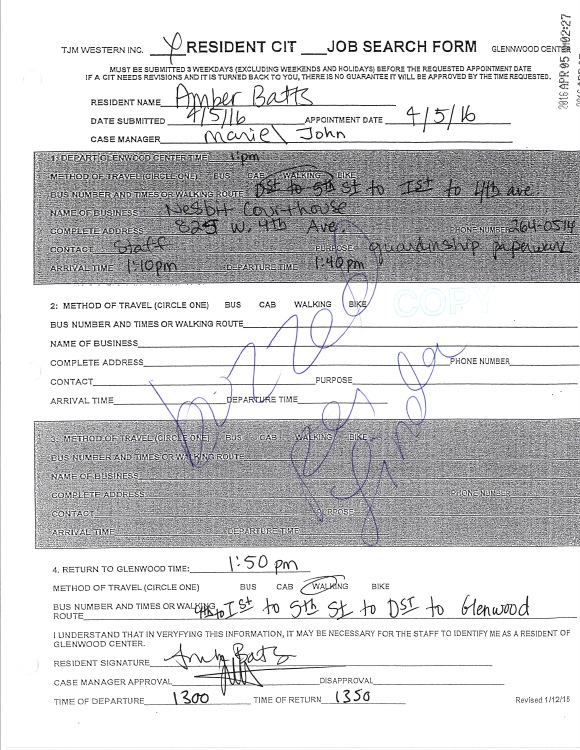 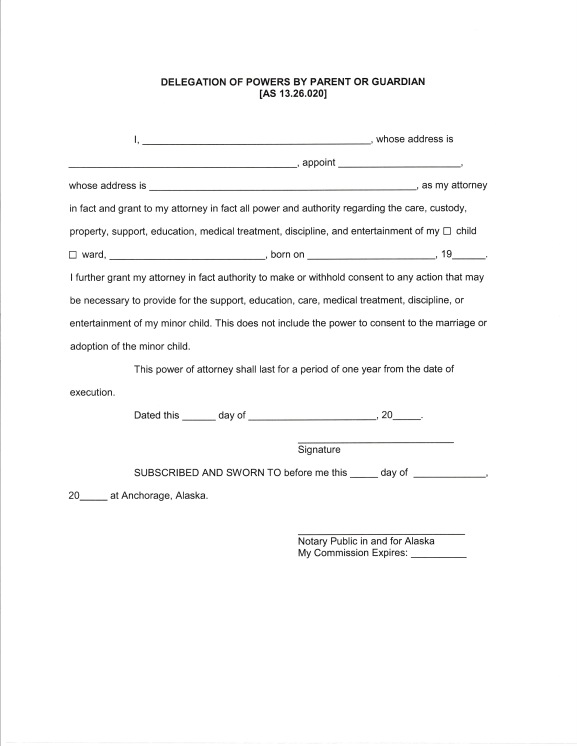 Clear, concise, complete. This was handed to me by the Assistant Director at the time, John. 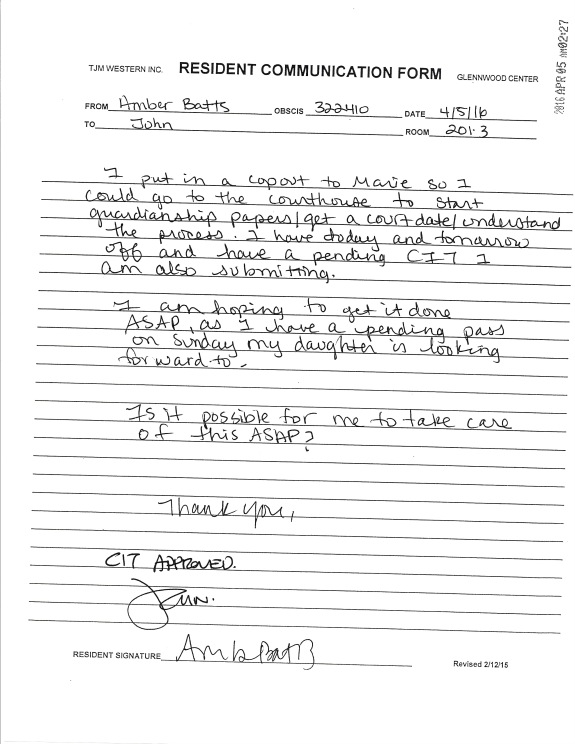 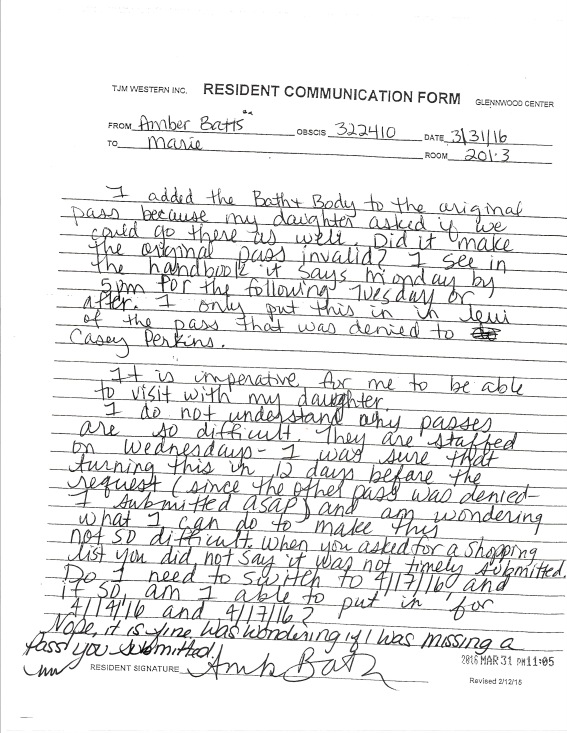 I was still married, so surely he could bring her in, he was, after all, her step-dad. I had gotten approval from my case manager, and after the one visit, this is what I came back to after work. 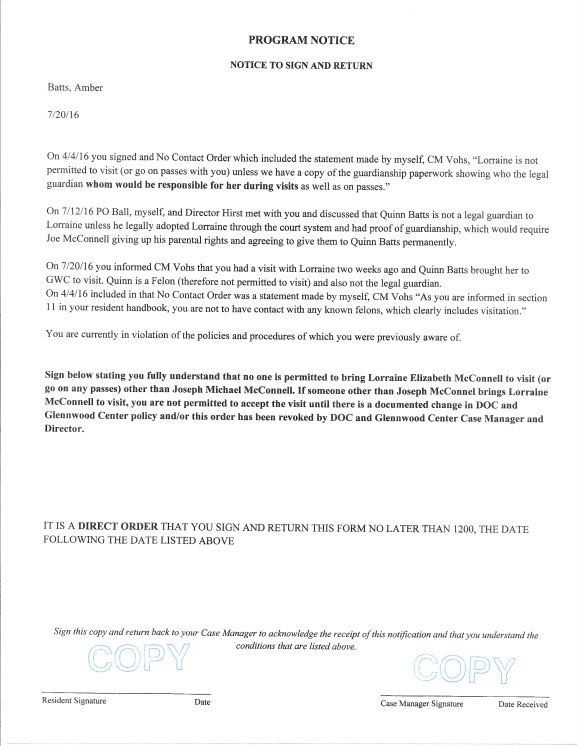 I dealt with it as best I could. 14 months later, I got out on ankle monitor.

While there I used a lot of calling cards, thanks to the many who were very supportive and sent them to me. I worked as much as I could and stayed busy, and I stayed as possible reading, writing my pen pals (thank you SWOP Behind Bars) and focused on the day I would get out and how I would let others know that this happens.

I know first hand how being pulled from positive supportive people affects us that are incarcerated. How being separated from our loved ones affect not only our lives, but their lives as well.

We are more apt to act out in ways that hinder us.  Long term solutions for short term problems look reasonable. We use drugs, we run away from GWC, we act out in various ways while trying to make sense of the fears and uncertainties we hold in.

It is a set up for failure and makes no real sense why things are done in such a way. Policies and part of the CRC standards is the reasoning I was told. Something needs to change. Peoples lives are at stake, not only those incarcerated, but our children, who grow up to be adults. This impacts society as a whole, and needs to be addressed as part of the recidivism of incarceration.

What are some of your experiences with parenting in prison or at a CRC?

What are some of the barriers you may have faced with re-entry issues?

What could be changed or is changing?

Follow This Is How We Rise on WordPress.com
Join 1,208 other followers

You can learn more about Alaska’s sex workers rights and changing the laws to make a difference by also following the CUSP blog!