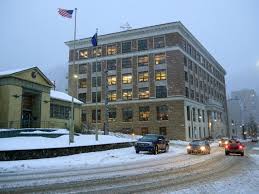 I just got back from Juneau, talking to legislative aides, Alaska State Representatives and Alaska State Senators about what this bill would entail for our Alaska communities as a whole. Community United for Safety and Protection (CUSP) has been visiting Juneau for 5 years now to educate and lobby for legislation to work towards criminalizing police sexual misconduct and changing the sex trafficking law so that consensual sex workers aren’t charged with trafficking themselves.

First, let me start this post by saying the HB225/SB165 bill in front of our politicians in Juneau would have made it possible for me to be incarcerated for a lifetime. Yes. Life. I am still feeling a certain away about going to jail for “sex trafficking” in the first place. Yes, it sucked while I was in. I lost a lot of material stuff (replaceable) but, I was able to watch my daughter graduate high school. I have been able to bring her down to the states for college. I have been able to watch my son perform some amazing theatre throughout Alaska celebrating his Tlingit culture. I have been able to live a life, even after going to jail.

If HB225/SB165 gets passed, my measly few years will be NOTHING compared to the minimum 20 years Alaskan sex workers will be looking at upon initial charges. A misdemeanor prostitution charge would become a sex trafficking unclassified felony charge. MINIMUM 20 years.

You read that right. MINIMUM 20 years.

But wait. There is more.

This doesn’t mean “well, just don’t book for others.”

That is still the law. Sex workers know that.

This means that if I, or you, or Beautiful Betsy, have a place of prostitution -meaning a hotel room, an Airbnb, an apartment – it can warrant a charge of an unclassified felony of sex trafficking.

This also means if I were to text Beautiful Betsy and ask about her about a new client who wants to meet and is listing her as a reference (making sure he is a decent guy I can be comfortable seeing sometime, usually alone in a room, essentially screening him before I set an appointment) I can be charged with an unclassified felony of sex trafficking.

And Beautiful Betsy can be charged with an unclassified felony of sex trafficking as well.

Does this make any sense at all? An unclassified felony on the basis of that.

Yes. You read that right.

I feel like I am repeating myself. Thank god for copy and paste, right?

But wait, there is more!

It authorizes members of the Alcoholic Beverage Control Board to act as “peace officers” which will further their ability to commit sexual assaults on sex workers and sex trafficking victims in the course of prostitution sting operations, just like the police are allowed to do now.

This also enacts the new crime of “patron of a victim of sex trafficking”.

If the person solicited is under 18 years of age this offense will be a B sex felony. Wait.

(1) induces or causes another person to engage in prostitution through the use of force;

(2) as other than a patron of a prostitute, induces or causes another person who is under 20 years of age to engage in prostitution; or

(3) induces or causes a person in that person’s legal custody to engage in prostitution.

After HB225/SB165 this would be a Class B felony, rather than an unclassfied felony.

HB225/SB165 goes on to propose: If the person solicited is an adult, this offense will be a C sex felony. This crime would be sentenced under then enhanced penalties for sexual felonies and the person would be required to register as a sex offender.

Did that just make it possible that if someone is arrested for having consensual sex, that they will be charged with a Class C felony? A patron? So clients looking for of age, consensual sex, would have to register as a sex offender?

Does that make any sense at all?

Don’t take my word for it.

All the info is listed.

Here is the link.

Then call your representative and senator to tell them that HB225/SB165 does nothing to address sex trafficking and rather trumps up misdeamenor charges into unclassified felony charges.

See the attached Alaska Department of Laws breakdown on HB22/SB165

Also, check out sextraffickingalaska.com to learn more about Community United for Safety and Protection (CUSP). We are a group of current and former sex workers, sex trafficking victims, and our allies working towards safety and protection in Alaska’s sex industry. We educate and advocate for each other as individuals trying to access equal protection under the law or other public services, and also at the legislative level. The only reason I am able to be articulate about this legislation is because of the work CUSP has done these last 5 years.

I have a passion for assisting small businesses to stand out on the web and look to innovative ways to maximize your marketing and online presence with any budget. The importance of having an online presence for attracting new customers cannot be understated. Not all websites are created equal. When looking at two competing businesses a customer is likely to go with the one that has a more professional, engaging, website.